Filed under: Featured , News , UFC , Videos It was a bizarre fight week in Cleveland, from fights being scrapped days before from illness, to fights being scrapped the day of from an elevator accident, to the whole CM Punk thing, to a near-melee between corners after the co-main event. And then there was Alistair Overeem ’s post-fight interview after his heavyweight title loss to champ Stipe Miocic at Quicken Loans Arena in Cleveland. In his first title defense, Miocic (16-2 MMA, 10-2 UFC) had a couple moments of worry against Overeem (41-15 MMA, 6-4 UFC), who knocked him down with a punch in the first round , then dove in and went after a guillotine choke on the ground. Miocic fought through it, got back to his feet, recovered and ultimately knocked Overeem out with a series of vicious right hands on the ground late in the frame. Overeem had his lights put out enough that he could be seen falling backward, still plenty dazed, while officials tried to help him to his stool. Moments later, after longtime UFC analyst and cage emcee Joe Rogan interviewed Miocic, he stepped over to have a few words with Overeem – which is nothing new following a high-profile title fight or main event. 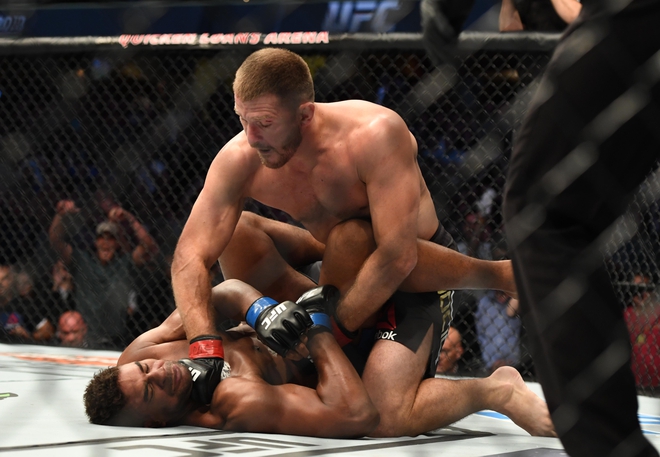