After playing out multiple scenarios, Tyron Woodley overwhelmed by options to beat Lawler

Filed under: Featured , Featured Videos , News , UFC , Videos Fighters commonly use the term “war” to describe what they expect when heading toward the octagon. Fighters who face champ Robbie Lawler , however, might just mean it a bit more literally. This concept is not lost on Tyron Woodley (15-3 MMA, 5-2 UFC), who prepares to take a stab at Lawler’s (27-10 MMA, 12-4 UFC) welterweight belt in the pay-per-view main event of UFC 201 on Saturday at Philips Arena in Atlanta. A self-proclaimed fan of the champ, who he dubbed “the biggest comeback story in MMA,” Woodley appreciates these battles. But that doesn’t mean the challenger anticipates one for himself – not in the way we’re used to seeing them, at least. “I might be knocking him the hell out – that’s how I think about it,” Woodley told MMAjunkie. “It’s one thing to look at someone that’s been in these wars, and also look at what happens during them. 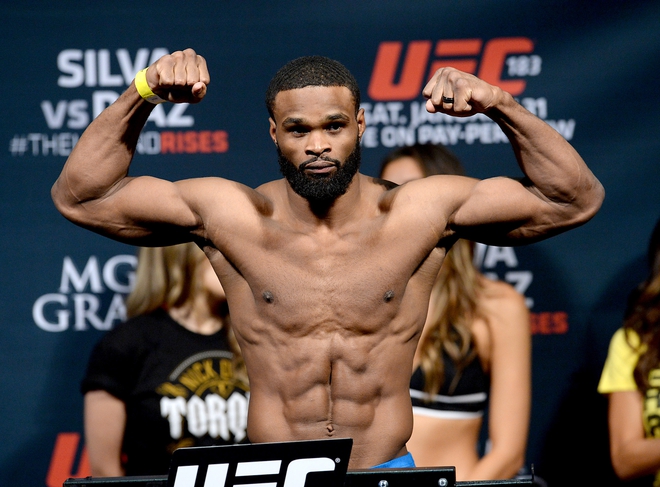 Previous Post
« Ian McCall wants to make another title run, but says UFC 201 fight could be his last
Next Post
Twitter Mailbag: Is Holly Holm who we thought she was? »
Welcome to BAD MMA – The origins of combat™
The BADDEST brand on the planet™
© 2009-2022 BADMMA.COM
All Rights Reserved.
The BAD MMA™ trademark, logos, slogans, and website
are the property of Funky Bacteria Productions
© 2009-2022 Funky Bacteria Productions ™
All Rights Reserved. =)