Filed under: Featured , Featured Videos , News , UFC , Videos Demian Maia and Carlos Condit were expected to engage in an exciting battle at UFC on FOX 21. Instead, Maia submitted Condit with a rear-naked choke in just 1:52. The welterweight bout was the main event of the UFC on FOX 21 event at Rogers Arena in Vancouver. It aired on FOX following prelims on FOX and UFC Fight Pass. After the fight, Maia (24-6 MMA, 18-6 UFC), who was in tears in the cage following his submission of Condit (30-10 MMA, 7-6 UFC), said he was willing to wait for the UFC’s plans of Stephen Thompson (13-1 MMA, 8-1 UFC) battling champ Tyron Woodley (16-3 MMA, 6-2 UFC) to play out. Related: UFC on FOX 21 results: Demian Maia runs through Carlos Condit's ground game in less than two minutes He reiterated his willingness to wait, rather than accept another fight, at the post-fight news conference 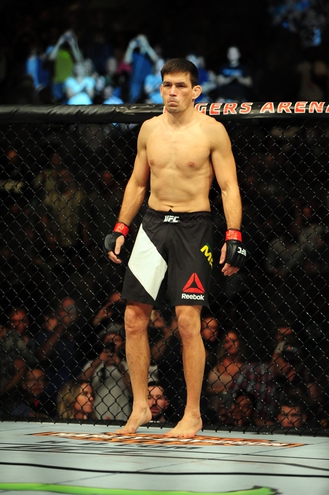 Previous Post
« Carlos Condit: ‘I don’t know if I have any business fighting at this level anymore’ after UFC on FOX 21
Next Post
Despite second win over Lauzon, UFC on FOX 21 winner Jim Miller ‘failed what I set out to do’ »
Welcome to BAD MMA – The origins of combat™
The BADDEST brand on the planet™
© 2009-2022 BADMMA.COM
All Rights Reserved.
The BAD MMA™ trademark, logos, slogans, and website
are the property of Funky Bacteria Productions
© 2009-2022 Funky Bacteria Productions ™
All Rights Reserved. =)