Filed under: Featured Videos , News , UFC , Videos SALT LAKE CITY – Before losing to Ricardo Lamas in 2014, Dennis Bermudez was on an impressive run while getting past seven straight opponents and collecting four fight-night bonuses along the way. That one setback, however, was followed by a TKO loss to Jeremy Stephens. And Bermudez went from being a rising threat in the 145-pound division to a fighter on a skid. After bouncing back with a decision win over Tatsuya Kawajiri, Bermudez (15-5 MMA, 8-3 UFC) now takes on Rony Jason (14-5 MMA, 4-2 UFC) at Saturday’s UFC Fight Night 92 event, and “The Menace” looks to reignite his momentum. 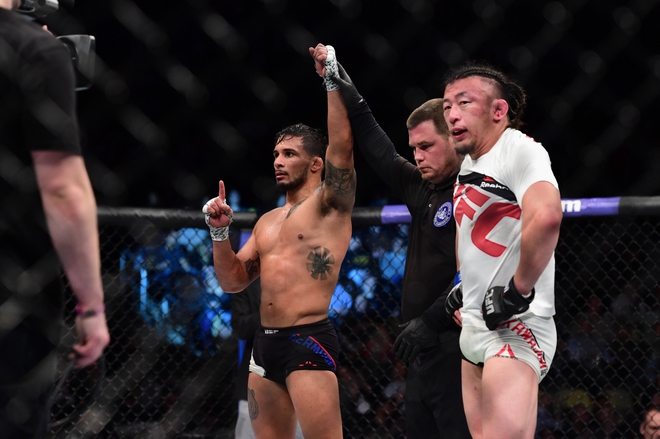 Previous Post
« UFC champ Dominick Cruz goes off: ‘I basically taught everybody to grow a pair’
Next Post
There are 75,000 Reasons Nick Diaz Can’t Fight in Nevada Yet »
Welcome to BAD MMA – The origins of combat™
The BADDEST brand on the planet™
© 2009-2021 BADMMA.COM
All Rights Reserved.
The BAD MMA™ trademark, logos, slogans, and website
are the property of Funky Bacteria Productions
© 2009-2021 Funky Bacteria Productions ™
All Rights Reserved. =)