Filed under: Featured Videos , News , UFC , Videos SIOUX FALLS, S.D. – It appears UFC flyweight Louis Smolka won’t get a shot at an interim title, despite his post-UFC Fight Night 91 request, but that doesn’t mean he wouldn’t appreciate a dress rehearsal. “I’d love to get some five-round fights,” Smolka (11-1 MMA, 5-1 UFC)s aid following his UFC Fight Night 91 victory over Ben Nguyen (14-6 MMA, 2-1 UFC). “I would really welcome that challenge. If we can throw something at (UFC matchmaker) Sean Shelby, if I could get some media to campaign for that, that would be great.” Smolka and Nguyen met in Wednesday’s FS1-televised main card of UFC Fight Night 91, which took place at Denny Sanford Premier Center in Sioux Falls, S.D. 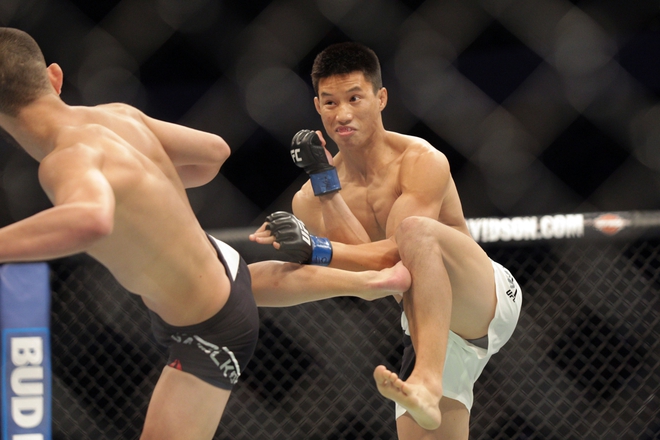 Previous Post
« Twitter Mailbag: What do we fear most with a change of UFC ownership?
Next Post
So what do Bellator fighters think about the UFC sale – especially some ex-UFC fighters? »
Welcome to BAD MMA – The origins of combat™
The BADDEST brand on the planet™
© 2009-2022 BADMMA.COM
All Rights Reserved.
The BAD MMA™ trademark, logos, slogans, and website
are the property of Funky Bacteria Productions
© 2009-2022 Funky Bacteria Productions ™
All Rights Reserved. =)