Filed under: Bellator , News , Videos A new generation of “Slice” is ready to follow in his father’s footsteps. Kevin Ferguson Jr. (0-0 MMA, 0-0 BMMA), the oldest son of Kevin “Kimbo Slice” Ferguson, is set to make his pro MMA debut next month at Bellator 160, according to a report from The Associated Press . Bellator officials have not yet announced Ferguson’s inclusion on the card, and his opponent is not yet known 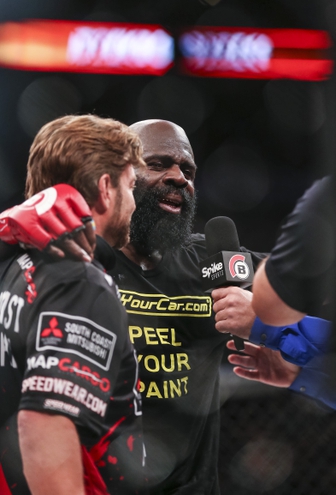 Previous Post
« Ben Rothwell: ‘I know that I can defeat any heavyweight on the planet’
Next Post
UFC 201 Free Fight: Watch Karolina Kowalkiewicz Beat Randa Markos in Her UFC Debut »
Welcome to BAD MMA – The origins of combat™
The BADDEST brand on the planet™
© 2009-2022 BADMMA.COM
All Rights Reserved.
The BAD MMA™ trademark, logos, slogans, and website
are the property of Funky Bacteria Productions
© 2009-2022 Funky Bacteria Productions ™
All Rights Reserved. =)