Filed under: News , UFC , Videos Fabricio Werdum ’s rematch with Travis Browne was weird from the opening second to the final bell. In fact, the weirdness extended well past the end of the bout. The heavyweight bout was the co-main event of the UFC 203 event at Quicken Loans Arena in Cleveland. It aired on pay-per-view following prelims on FS1 and UFC Fight Pass. Werdum (21-6-1 MMA, 9-3 UFC) opened the bout with a flying side kick, landing to the face of Browne (18-5-1 MMA, 9-5-1 UFC) 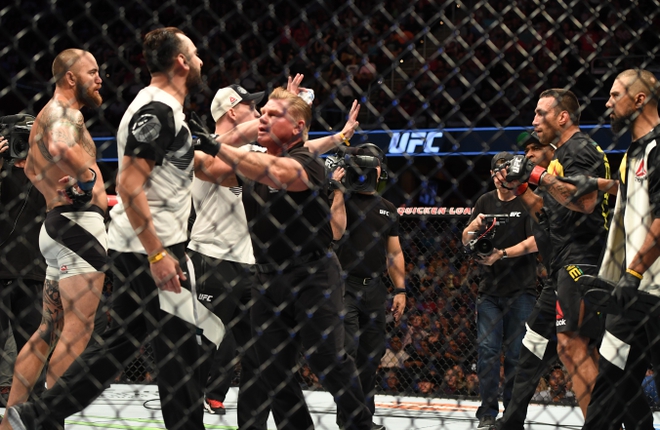 Previous Post
« CM Punk: What His Peers are Saying After He was Soundly Defeated
Next Post
UFC 203: Mickey Gall vs. CM Punk video highlights »
Welcome to BAD MMA – The origins of combat™
The BADDEST brand on the planet™
© 2009-2022 BADMMA.COM
All Rights Reserved.
The BAD MMA™ trademark, logos, slogans, and website
are the property of Funky Bacteria Productions
© 2009-2022 Funky Bacteria Productions ™
All Rights Reserved. =)