UFC 203′s Jessica Andrade ready for whatever’s next, likes how she matches up against Jedrzejczyk

Filed under: Featured Videos , News , UFC , Videos CLEVELAND – Jessica Andrade ’s 115-pound promise became somewhat of a reality after Saturday’s UFC 203. Now 2-0 since dropping from bantamweight, Andrade (15-5 MMA, 6-3 UFC) made another quick victim with the bonus-winning  first-round submission of Joanne Calderwood (11-2 MMA, 3-2 UFC) . Andrade’s number of strawweight scraps might still be slim, but both the manner in which they came about and her veteran status have already put her in conversations for title contention – a position that she doesn’t necessarily claim, but welcomes. “I’ve been doing very well in my new division,” Andrade said during UFC 203’s official post-fight press conference.  “I’ve been getting the weight down very well, very easily – unlike many girls in the division. I’m always ready for whatever comes. “If the UFC feels like it’s time for me to fight for the belt, I will. 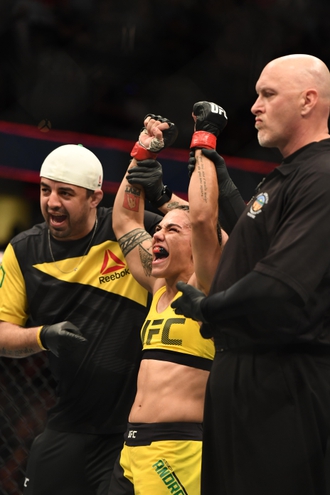 UFC 203′s Jessica Andrade ready for whatever’s next, likes how she matches up against Jedrzejczyk – MMA Junkie

Previous Post
« Professional wrestlers react to CM Punk’s unsuccessful MMA debut at UFC 203
Next Post
Trading Shots: Did CM Punk prove trying is enough, or is he playing by his own rules? »
Welcome to BAD MMA – The origins of combat™
The BADDEST brand on the planet™
© 2009-2022 BADMMA.COM
All Rights Reserved.
The BAD MMA™ trademark, logos, slogans, and website
are the property of Funky Bacteria Productions
© 2009-2022 Funky Bacteria Productions ™
All Rights Reserved. =)