UFC commentator Dan Hardy trying to get medical clearance, but has ‘to see where the sport is’

Filed under: Featured Videos , News , UFC , Videos HAMBURG, Germany – With all the talk of un-retiring at a Q & A for UFC Fight Night 93, it was natural someone would ask onetime UFC welterweight title challenger and commentator Dan Hardy about getting back in the cage. After all, Hardy’s exit from the sport three years ago was unceremonious, and from his perspective, unfair. A diagnosis of Wolf-Parkinson-White syndrome certainly was serious, but not deserving of a de-facto ban from the sport, at least from the British veteran’s perspective. Hardy has since immersed himself in his role outside the cage and has come to relish his job, all while flirting with the idea of a comeback – if he could get cleared to fight. That desire is still there, he today told fans. But at 34, it’s less burning than before. 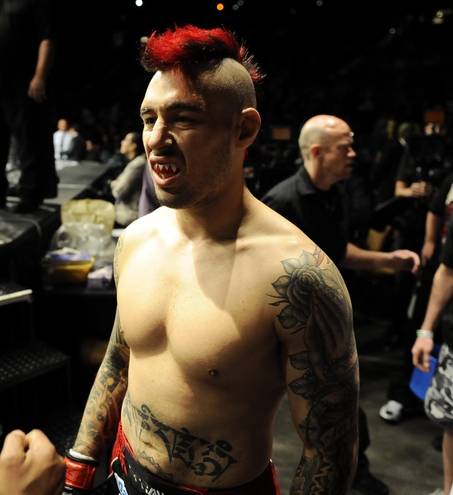 UFC commentator Dan Hardy trying to get medical clearance, but has ‘to see where the sport is’ – MMA Junkie

Previous Post
« UFC Hall of Famer Matt Hughes would return for a title shot – or Matt Serra fight
Next Post
Mairbek Taisumov out of UFC 203 bout with Nik Lentz due to visa issues »
Welcome to BAD MMA – The origins of combat™
The BADDEST brand on the planet™
© 2009-2022 BADMMA.COM
All Rights Reserved.
The BAD MMA™ trademark, logos, slogans, and website
are the property of Funky Bacteria Productions
© 2009-2022 Funky Bacteria Productions ™
All Rights Reserved. =)