Filed under: Featured Videos , News , UFC , Videos HAMBURG, Germany – For UFC light heavyweight Ryan Bader , fight week was a fun experience – or at least much more fun than it’s been in the past. Despite going into hostile territory on the heels of a bad knockout loss, Bader (21-5 MMA, 14-5 UFC) said he felt good all the way leading up to his fight with Ilir Latifi (12-5 MMA, 5-3 UFC) at UFC Fight Night 93, which translated into his performance in the cage. “I got to this point where I had five wins in a row, and I was always looking for the next thing,” Bader told MMAjunkie after a shocking knockout of Latifi on the UFC Fight Pass main card of the event at Barclaycard Arena in Hamburg, Germany. “I had a terrible fight my last fight, and I just let the pressure build up and get to me. Related: UFC Fight Night 93 results: Ryan Bader lays out Ilir Latifi with crushing knee “So my team and I decided, we need to have fun with this. Get back to old school and train and have fun. 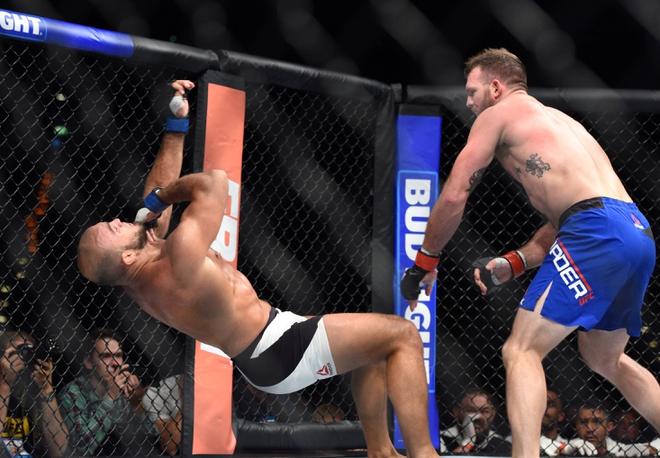 Previous Post
« At heavyweight, two old dogs up to the same tricks
Next Post
UFC Fight Night 93 headliner Josh Barnett holds no grudge over eyepoke, not ruling out a future title shot »
Welcome to BAD MMA – The origins of combat™
The BADDEST brand on the planet™
© 2009-2022 BADMMA.COM
All Rights Reserved.
The BAD MMA™ trademark, logos, slogans, and website
are the property of Funky Bacteria Productions
© 2009-2022 Funky Bacteria Productions ™
All Rights Reserved. =)