Filed under: News , UFC Women’s MMA is still in an infantile stage in the UFC when compared to male divisions. The evolution of female fighters in that short window has already been remarkable, but undefeated bantamweight Katlyn Chookagian appears primed to be a torchbearer for the next generation of women’s MMA fighter. The famous names of women’s fighting such as Ronda Rousey (judo), Holly Holm (boxing) and Miesha Tate (wrestling) all came to MMA from single-discipline backgrounds, later rounding out their skill sets. Chookagian (8-0 MMA, 1-0 UFC), who recently won her UFC debut with a unanimous decision over Lauren Murphy (9-3 MMA, 1-3 UFC) at UFC Fight Night 91, comes ready with all kinds of tricks in her back pocket. Although Chookagian’s victory over Murphy consisted mostly of counter-striking an aggressive opponent and looking to stop takedowns, she said it must be noted that she took the fight on less than two weeks’ notice and the 15-minute bout revealed only a sliver of her ability 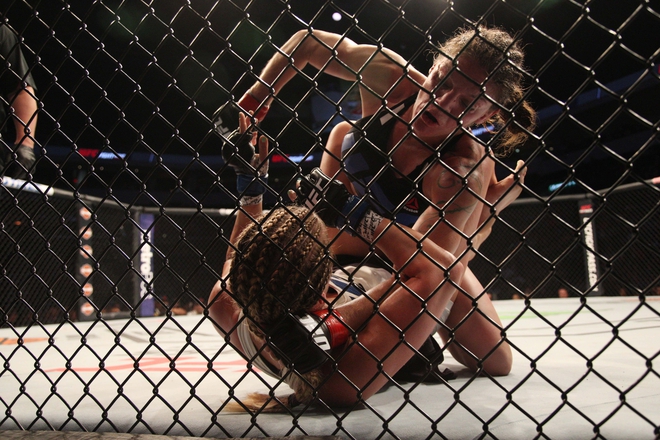 Previous Post
« Stream or download MMAjunkie Radio #2245 with Dustin Poirier, Melvin Guillard and Trevin Giles
Next Post
Chael Sonnen enters USADA testing pool, but won’t fight again ‘if the test is as good as I remember it being’ »
Welcome to BAD MMA – The origins of combat™
The BADDEST brand on the planet™
© 2009-2022 BADMMA.COM
All Rights Reserved.
The BAD MMA™ trademark, logos, slogans, and website
are the property of Funky Bacteria Productions
© 2009-2022 Funky Bacteria Productions ™
All Rights Reserved. =)