Video: Forget fighting – let Teruto Ishihara give you the dating advice you know you need

Filed under: Featured , Featured Videos , News , Videos PROVO, Utah – By now, you certainly know that UFC featherweight prospect Teruto Ishihara (9-2-2 MMA, 2-0-1 UFC) packs one heck of a punch in is left hand. But it turns out the octagon might not be where he does his best work. Ishihara picked up a first-round TKO victory over Horacio Gutierrez at this past weekend’s UFC Fight Night 92 event, scoring a $50,000 “Performance of the Night” bonus in the process. After his win, just like he did in his previous victory, took to the microphone to send on his love for the ladies , as well as an invitation for an evening of entertainment, which apparently proved successful . 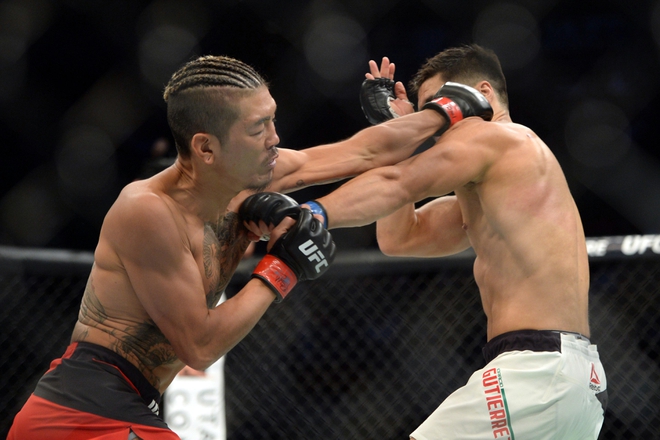 Previous Post
« Undefeated ONE Championship Fighter Christian Lee Has Just Scratched the Surface
Next Post
Nate Diaz says he was UFC’s ‘biggest draw,’ ‘biggest everything’ before Conor McGregor arrived »
Welcome to BAD MMA – The origins of combat™
The BADDEST brand on the planet™
© 2009-2022 BADMMA.COM
All Rights Reserved.
The BAD MMA™ trademark, logos, slogans, and website
are the property of Funky Bacteria Productions
© 2009-2022 Funky Bacteria Productions ™
All Rights Reserved. =)