BOMBS being dropped from @AshleeMMA !!! #UFCHamburg https://t.co/aZQ6YSkD2T — #UFCHamburg (@ufc) September 3, 2016 Veronica Macedo was a tough test for Ashlee Evans-Smith , but midway through the third round, the elbow bombs Evans-Smith dropped would’ve been enough for anyone. Evans-Smith (5-1 MMA, 2-1 UFC) got to the top against Macedo (5-1 MMA, 0-1 UFC), who took the fight as a short-notice replacement and is just 20 years old. And that was all she wrote. Related: UFC Fight Night 93 results: Ashlee Evans-Smith TKOs game Veronica Macedo in third Check out the video above to see Evans-Smith drop down a series of elbows that led to a third-round stoppage and a TKO win – the first stoppage victory of the night at UFC Fight Night 93, which took place at Barclaycard Arena in Hamburg, Germany, and streamed on UFC Fight Pass. For complete coverage of UFC Fight Night 93 , check out the UFC Events section of the site. 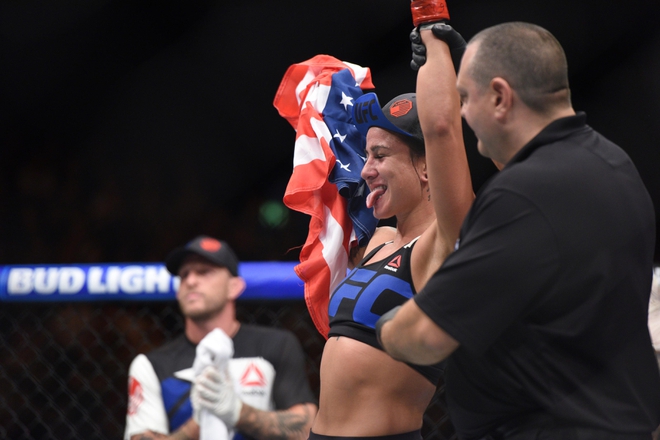