Filed under: Featured , Featured Videos , News , UFC , Videos LAS VEGAS – Eddie Alvarez knows a thing or two about fighting in championship bouts, and it’s that experience he believes may pay off for him Thursday night. Alvarez (27-4 MMA, 2-1 UFC), in just his fourth UFC contest, will challenge lightweight champion Rafael dos Anjos (25-7 MMA, 14-5 UFC) for the title in the UFC Fight Night 90 main event. He said he knows the champion presents a tough task – but also may not have seen someone the likes of Alvarez before. “‘RDA’ is a great opponent, a dangerous competitor – you can’t deny what he’s done, and he’s done it against top competition,” Alvarez said today after a workout ahead of Thursday’s card. “I look up to him 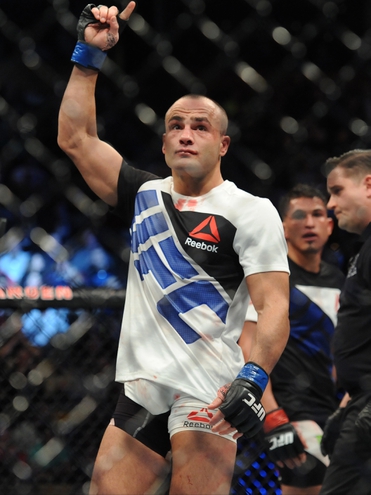 Previous Post
« Joanna Jedrzejczyk discusses bully role on ‘TUF 23′: ‘I said what I said and I did what I did’
Next Post
TUF 23 Finale’s Ross Pearson details past kidney, digestive issues ahead of fight with ‘zero’ Will Brooks »
Welcome to BAD MMA – The origins of combat™
The BADDEST brand on the planet™
© 2009-2022 BADMMA.COM
All Rights Reserved.
The BAD MMA™ trademark, logos, slogans, and website
are the property of Funky Bacteria Productions
© 2009-2022 Funky Bacteria Productions ™
All Rights Reserved. =)