Filed under: Featured , Featured Videos , News , UFC , Videos LAS VEGAS – Nate Diaz isn’t very impressed by the spin Conor McGregor has put on the result of their first encounter ahead of Saturday’s rematch in the UFC 202 main event. McGregor (19-3 MMA, 7-1 UFC) has thrown out many reasons why he believes his second-round submission loss to Diaz (19-10 MMA, 14-8 UFC) at UFC 196 in March came about the way it did. From a lack of time to prepare after original opponent Rafael dos Anjos fell out, to the jump up to the welterweight division, to Diaz’s Homer Simpson-like durability, “The Notorious” has plenty of ammo to explain his loss. Unfortunately, Diaz isn’t buying any of it, especially since he was the one that stepped into the contest as an injury replacement on just 10 days’ notice . McGregor will have the chance to right what he claims was a one-time wrong when he steps in the octagon with Diaz again at UFC 202, which airs on pay-per-view from T-Mobile Arena in Las Vegas following prelims on FS1 and UFC Fight Pass. Diaz, however, isn’t buying any of McGregor’s “excuses.” Particularly his prediction of a second-round knockout victory 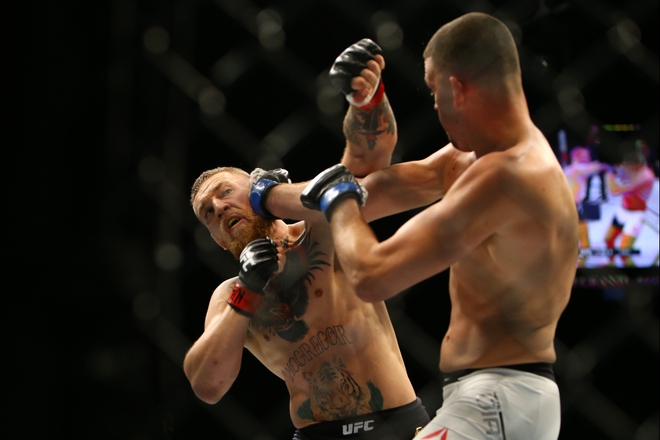