Filed under: Featured Videos , News , UFC , Videos ATLANTA – After snapping a skid in which he twice lost a split decision, Jorge Masvidal is back on the right foot after unanimously outpointing short-notice replacement Ross Pearson. That means Masvidal can, for now, put to the back of his mind the possibility of being released from his UFC contract. He can start making requests. As it turns out, Masvidal (30-11 MMA, 7-4 UFC) wanted the winner of a welterweight bout between Matt Brown and Jake Ellenberger , which followed up his FS2-televised prelim win on the pay-per-view main card of UFC 201 at Philips Arena in Atlanta. “The winner sounds like a treat for the fans,” Masvidal said backstage after beating Pearson (29-12 MMA, 6-5 UFC). 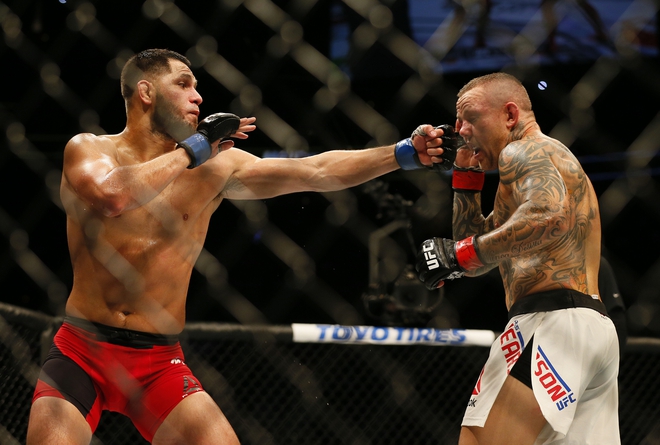 Previous Post
« Ryan Benoit credits newly-adjusted mindset and strategic approach for short-notice UFC 201 win
Next Post
UFC 201 winner Erik Perez on risky third-round brawl with Francisco Rivera: ‘I got out of my mind’ »
Welcome to BAD MMA – The origins of combat™
The BADDEST brand on the planet™
© 2009-2022 BADMMA.COM
All Rights Reserved.
The BAD MMA™ trademark, logos, slogans, and website
are the property of Funky Bacteria Productions
© 2009-2022 Funky Bacteria Productions ™
All Rights Reserved. =)