Filed under: Featured Videos , News , UFC , Videos VANCOUVER – There’s a good chance Saturday’s nationally televised UFC event in Vancouver is going to bring with it a bunch of new eyeballs thanks to Paige VanZant. The UFC strawweight in the spring appeared on ABC’s “Dancing With the Stars” and was the show’s runner-up. On Saturday, VanZant (6-2 MMA, 3-1 UFC) will do a different kind of dance – this one against Bec Rawlings (7-4 MMA, 2-1 UFC) on the UFC on FOX 21 main card. UFC on FOX 21 takes place Saturday at Rogers Arena in Vancouver. It airs on FOX following early prelims on UFC Fight Pass 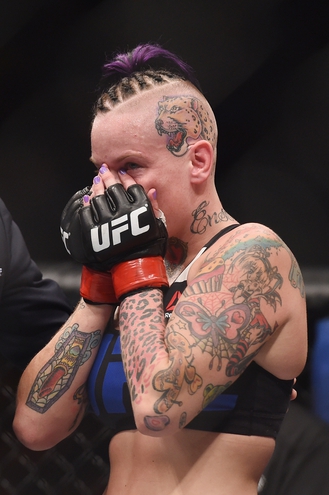 Previous Post
« After ‘DWTS,’ UFC on FOX 21′s Paige VanZant realized: ‘I don’t make that much money’
Next Post
UFC on FOX 21′s Charles Oliveira ahead of bout with Anthony Pettis: ‘I’m here to stay’ »
Welcome to BAD MMA – The origins of combat™
The BADDEST brand on the planet™
© 2009-2022 BADMMA.COM
All Rights Reserved.
The BAD MMA™ trademark, logos, slogans, and website
are the property of Funky Bacteria Productions
© 2009-2022 Funky Bacteria Productions ™
All Rights Reserved. =)